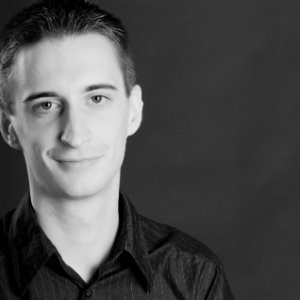 Even though Streamr has some really nice client libraries and a CLI, I wanted to go another way. The non-techie way. In 2019, it should already be possible to contribute to a blockchain without being a highly-experienced developer. It should be possible for everyone. So, I played around a bit.

For most blockchain projects it’s still necessary to build up a complex dev environment, install a bunch of npm packages or juggle various terminal commands. Don’t get me wrong, this is fine in general. Blockchain technology is still at the beginning and it’s on us, the developers, to take the important steps forward. But to involve more people, it’s necessary to simplify user accessibility to this technology and its applications.

With Streamr there is a “simple” REST API for easy integration with other systems. It’s still not quite like sending an email or using a simple app on your phone, but it’s much simpler than doing all the stuff in your favorite programming language. With this in mind, I searched for a solution to create a data stream for Streamr without a single line of code.

I’ve been a big fan of the service Integromat for a number of years. Some say it’s kind of like a copycat of Zapier, but in my view, it’s a more flexible system with the ease of a GUI and the flexibility of a programming language. A perfect service for this case. After reading all of Streamr’s great documentation, I brainstormed a simple use case for a Stream, and put everything together. The result is a simple workflow interface that pulls the Top50 Twitter trends every 12 hours and pushes them to the Streamr API. I did all this using Integromat and without a single line of code. 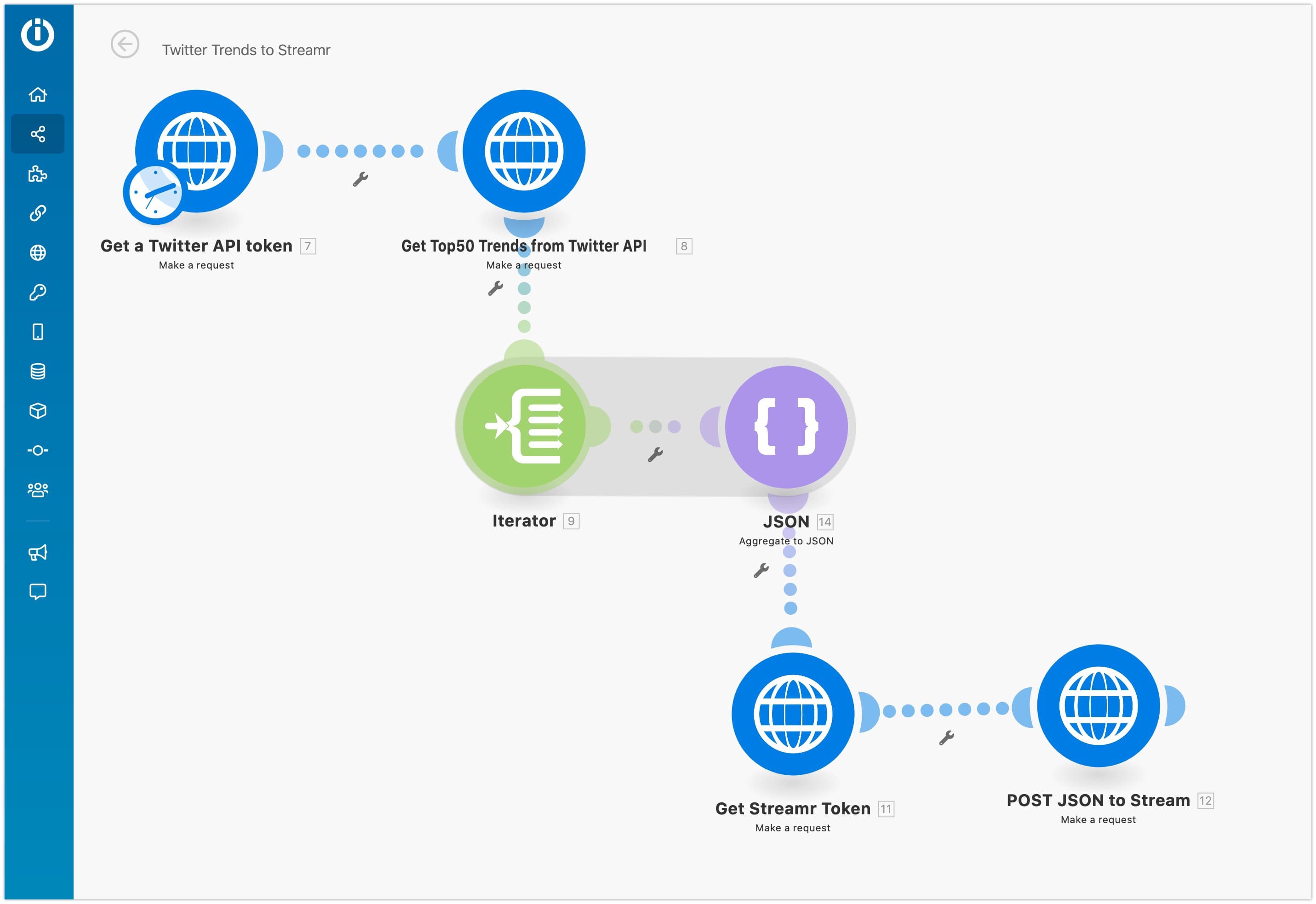 The POC was still very simple but did the job nicely. Time to enhance the scenario. The next step was to do the same for different, specific locations, rather than global trends. I added some more modules and also a data store for the WOEID (A location id introduced by Yahoo and used by Twitter for different countries). 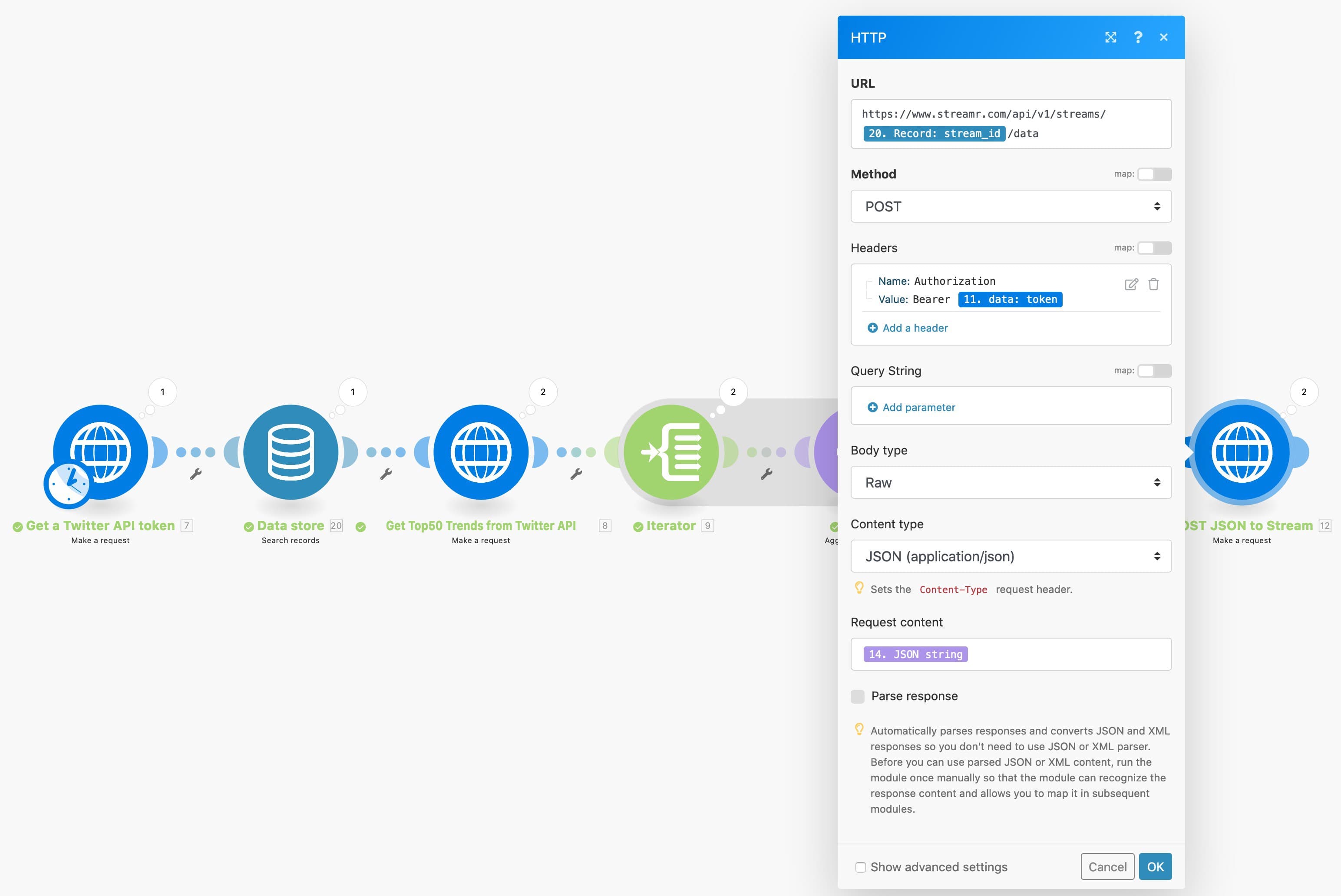 In the end, you still have to be a developer to understand the basics. What is an endpoint? How do you execute an authentication? Why do I need an authorization token? How can I structure a JSON file? And so on. That being said, the process was still crazy simple.

It also shows how powerful Integromat can be. Here and there you have to get used to the concept and warm up to the individual modules, but ultimately the possibilities appear unlimited and come very close to the functionality of manual programming.

Contrary to my introduction, it’s not a way to contribute for everyone. But it’s a big step forward. It’s much simpler than setting up a dev environment and writing code.

Heiko is an experienced and passionate Shopify freelancer, but also eager to learn and consult about Blockchain. As Product Manager, he gathers experience in eCommerce as well as online and decentralized marketing.